The regeneration of Barnard Park has been a very long process.

The original plan envisaged by architects Latz+Partner and endorsed by the Council in March 2009 did not materialise. In this post-financial-crisis world, there was not the money to fulfil the Latz vision. Consequently, work later began on a downsized plan guided by public consultation.

A new masterplan was put on the table in October 2015. The proposed plan was designed be executed on a smaller budget. The plan contains a new 3G pitch with an astro-turf surface, a large, multi-use grass area and a central hub space with seating.

Islington Council’s planning committee resolved to grant planning permission for the proposal on 9 May 2017. However, the application was ‘called in’ by the Secretary of State as a result of Sport England objections. Subsequently, last October a compromise was reached acceptable to the Council and Sport England based on a 9-a-side football pitch, not a 7-a-side football pitch, as pictured below.

This development means that the regeneration of the park could take place in one phase instead of two (as was previously anticipated). It will allow also the Council to bring forward plans to provide a community hub building that would include new park toilets.

The detailed design of the compromise is now being be worked up, but it is to be consistent in location with the key elements of the plan in the application. It will involve a new planning application and further community consultation. Hopefully, this process will soon result in a park to be enjoyed by everyone. 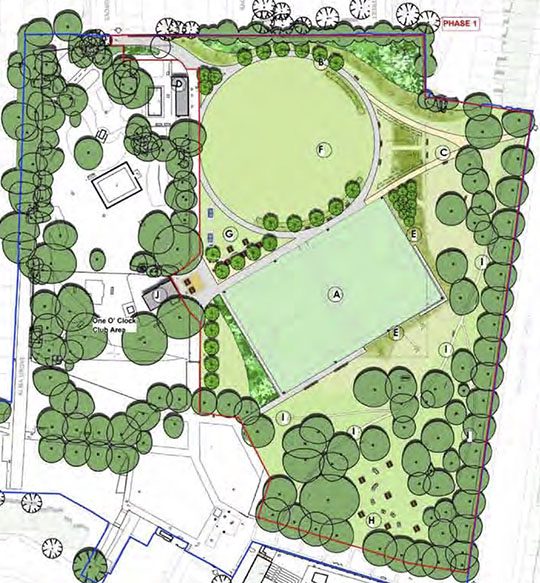