Before 1800, Barnsbury was mostly pastures and pleasure gardens. Just to the southeast of the park, along the present Barnsbury Road, the curved facade of White Conduit House and its pleasure garden thrived on the envigorating heights overlooking the City. It was a place for the inhabitants of London to come for a day out, and it is where cricket was born. White Conduit Field, extending over part of the present Barnard Park, was briefly the home of the White Conduit Club (WCC), a gentleman’s cricketing club. In 1794, in the face of the forthcoming speculative land sales, the bowler Thomas Lord took the WCC to new grounds and a new name (the MCC) in Marylebone and then to Lord’s in St John’s Wood.

The streets now buried beneath Barnard Park — to name a few, Pulteney St, Reid St, Boxworth Grove and Gainford St in the main park and Everilda St and Shirley St in the western extension — were a mix of houses for aspiring middle class and artisan families. In the great squares of Barnsbury, eg, Lonsdale and Thornhill Squares, leasehold covenants restricted occupancy to one family for each dwelling. Not so for the surrounding streets, which quickly became seriously overcrowded. London families who sought fresh air were disappointed by fumes from the tile kilns and paint factories along the Caledonian Road, exacerbated by St Pancras gasworks (1824–1907) upwind to the west. Many moved on as London unrolled northwards and already by the 1850s the area was in serious decline

In the next 70 years good intentions tinkered occasionally with the street plan to instate such worthy institutions as St Thomas’s church and St Thomas’s school on Everilda St now buried in the present extension of Barnard Park, familiarly called the Dog Park. These adjustments were minor besides the changes to come.

Next, the streets to the north between Copenhagen St and Richmond Avenue were, like many others locally, levelled by enemy action in December 1940. This defined the outline of the park that we know now. The site remained a moonscape of rubble, damaged buildings and temporary prefabricated houses until clearance began more than 20 years later in the late 1960s.

The park was developed in two stages. To the north, the present football pitch and its surroundings were installed in what was first known as Barnsbury Park. To the south, streets alongside Copenhagen St were levelled to complete the present nine acre perimeter, containing what was once a fine paddling pool near the Lark in the Park as well as the amphitheatre of the present Adventure Playground. The new park was opened in 1975. It was later renamed in appreciation of Islington Cllr George Barnard’s dedication to sport in Islington.

These 10 acres were only a part of Cllr Barnard’s vision to level as much housing again for football pitches. We do not know exactly where the ball might have swung, but his plan for 9 more acres of football, which was successfully resisted by local conservationists, could only have been accomplished by demolition of the Cloudesley estate to the east, or Richmond Avenue/Ripplevale Grove to the north — or both.

Islington Council's Local History Centre created an exhibition on the history of Barnard Park in 2010. It contains a variety of interesting information and photographs. It is available on the Web, though as it is distributed in large pdf files you may have to be patient for the download, the first part is here and the second part is here. 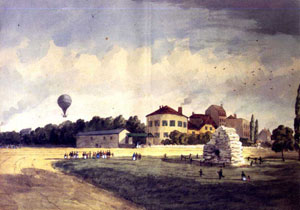 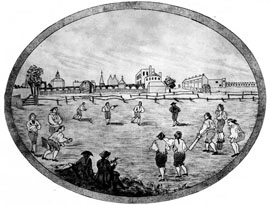 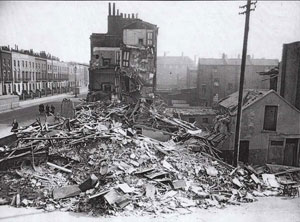 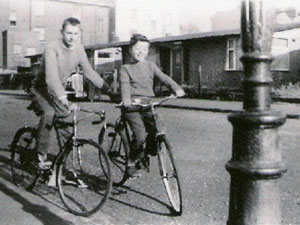 Boy's life among the post-war pre-fabs