The masterplan is the product of an extensive consultation process, which is described in the report presented with the masterplan. The whole process began in 2003 when Greenspace asked the community and those who provide youth services within the park to contribute ideas for the regeneration of the park. After years of local meetings, a brief was produced and approved by the Council’s West Area Committee in 2006. This brief formed the basis for submissions to a design competition, won by Latz+Partners in March 2008, and the plan which was presented to the public. For a year, local opinion on the proposal was canvassed in meetings, workshops and events, and changes were made to the plan.

Groups asked for their say on the masterplan included: dog walkers, the police, children from five local primary schools including St. Andrews, residents in a wide area near the park and on the Barnsbury estate, mothers with toddlers from the Bemerton Estate, children and teenagers from the Adventure Playground and the Barnsbury estate, the tree officer and other Council department representatives. Park users who didn’t fall into any of these categories were also encouraged to comment.

The views presented in the consultation and the decisions taken were documented in a final report. When the West Area Committee approved the new masterplan for Barnard Park in 2009, it also commended the consultation process for effectively including the views and needs of all members of the local community. 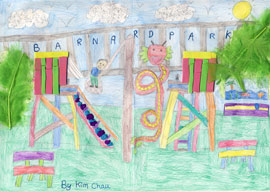 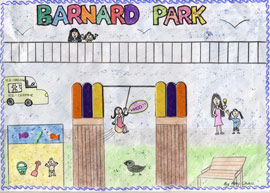 The consultation asked children to imagine the park as they'd like to see it.