A short walk from the Angel or King’s Cross, Barnard Park is large city park which provides green space and amenities for a diverse community. Cricket was invented nearby in the early eighteenth century, at White Conduit Fields (just south of the modern intersection of Barnsbury Road and Dewey Road). The area was developed into terraces of brick houses in the nineteenth century, and then bombed in the 1940s. Re-developed as a park in the 1960s, Barnard Park now contains a football pitch, playgrounds for children of various ages and a pleasant green space with views reaching over King’s Cross to the West End.

The Friends of Barnard Park work for improvement of all aspects of the park. We organise community gardening projects to plant bulbs and whole beds. We liaise with police and council to improve park security. We organise events in the park, which have included local history exhibits, picnics, performances by local artists, boules and bouncy castles. We work with the council and community groups to create a vision for the regeneration of the park, and to incorporate within it the views and preferences of local residents.

Membership of the Friends is open to all. We hope that you'll join us. 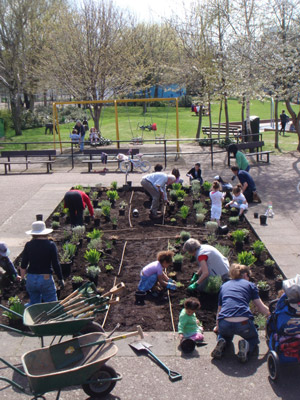